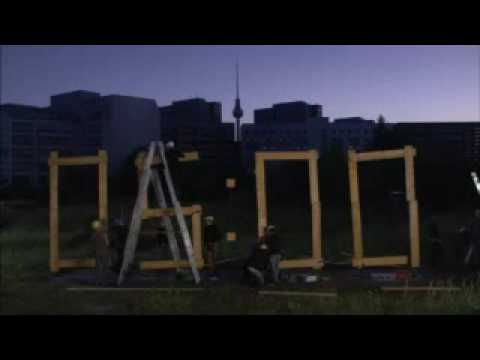 PRODUCT: Standard Time DVD
MATERIALS: DVD
DESIGNER: Mark Formanek
Standard Time is simultaneously a film, a work of art, and a thought-provoking performance on the concept of time. The spectator looking at Standard Time does not only see the time, but also people constructing it. People who, with a stoic sense of duty, are wasting time on an apparently useless activity that fulfills only one function: to display time. Even though the workers are trying hard to construct every single minute, they are constantly on the verge of failing.

Standard Time is a performance lasting exactly 24 hours and recorded on film. However, this film is much more than just the recording of an action, the recording of something that has taken place in the past; it is also a clock. A clock for use right now and in the future which, as each day goes by, extends further into the past, but is still up-to-date and punctual.

Standard Time is an artwork by Mark Formanek, realized by Datenstrudel in coproduction with Bigfish GmbH. 24 hours. NOTE: DVD is for use only on computers (either MAC or PC). It does not play on a standard DVD player.
All proceeds from the MCA Store support the exhibitions and programs of the Museum of Contemporary Art Chicago.